Maslow’s Hierarchy of Needs – Is the pyramid a hoax? 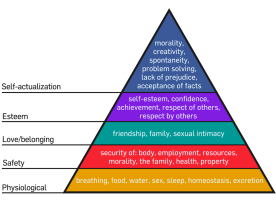 Did you know that this pyramid, that has become commonly known as “Maslow’s Hierarchy of Needs” never actually appears in Maslow’s original work? Source: http://en.wikipedia.org/wiki/File:Maslow%27s_Hierarchy_of_Needs.svg

I’m a big believer in going back to original sources, rather than relying on secondary sources.

Recently I was reading Maslow’s original 1943 article, “A theory of human motivation”. I was curious about his hierarchy of needs and wanted to learn more about it. When I began poking around on the Internet, I found that the pyramid was commonly cited as being from either his 1943 article or his 1954 book.

Wanting to find the original, I went to the oldest work first. I quickly flipped through the 27-page article from 1943, which was available on line through my university library. I looked for the pyramid figure. It was nowhere to be found. Maslow does talk about a hierarchy of needs, but there was no diagram of a pyramid.

I wondered if maybe it was in the 1954 book, Motivation and personality. I went to the University library and took out a copy of the book. The pyramid is not there either. In fact, there isn’t even one diagram or drawing in the entire book.

What Maslow does say about the hierarchy of needs is, “if I may assign arbitrary figures for the sake of illustration, it is as if the average citizen is satisfied perhaps 85% in his physiological needs, 70% in his safety needs, 50% in his love needs, 40% in his self-esteem needs and 10% in his self-actualization needs” (Maslow, 1943, pp. 388-389). So if we were to draw a diagram to represent Maslow’s hierarchy, the physiological needs would need to represent a much bigger piece of the pyramid.

The iconic pyramid of what has become known as “Maslow’s Hierarchy of Needs” is, arguably, a mutation or an interpretation of  the original work. (Some might even call it a bastardization, but that may be a little harsh…)

Recently in the class I was teaching on technology and inquiry-based learning, I posed a question to my grad students: “Where did Maslow’s pyramid come from?” Some of them thought it was a trick question. Others thought it was too easy. In their quest to answer the question I had posed for them, they embarked on their own inquiry-based learning. Some drew parallels between the mysterious origin of Maslow’s pyramid and the origin of the Egyptian pyramids. Others said they wanted to go to the library straight away and find the 1954 book. (An electronic copy of the book was not available, at least not through our library.) Other students began asking how they could have accepted the pyramid as a true representation of Maslow’s work, when in fact it is not.

What can we learn from this?

1. Original works are adapted by others. Some purists argue that mash-ups are an aberration; that they defile the original work. Well, people have been modifying and adapting original works for centuries.

3. Don’t believe everything you see on the Internet. The pyramid figure that has come to represent Maslow’s work appears all over the Internet. Yet, it never appears anywhere in his original work. There is value in learning to discriminate between original research and was is presented on the Internet as “truth”.

4. Check others’ citations. Maslow’s pyramid has been cited in both academic and popular articles as originating from both his 1943 article and his 1954 book. Yet, the pyramid appears in neither original source. It is important for researchers, scholars and students to (respectfully) check other authors’ citations. Do not take it for granted that simply because a  reference appears in a bibliography that it means the citation is correct.

5. Learn to “drill deep” in your research. Often we take it for granted that others’ research is “the real deal”. Part of our professional practice means that we allow our curiosity to drive our search for knowledge. Learning to “drill deep” means that you take on the challenge of finding out for yourself, learning to analyze and think critically and not simply rely on what others say.

This entry was posted on Saturday, August 4th, 2012 at 7:21 am and is filed under education, research, Uncategorized. You can follow any responses to this entry through the RSS 2.0 feed. Both comments and pings are currently closed.

6 Responses to Maslow’s Hierarchy of Needs – Is the pyramid a hoax?