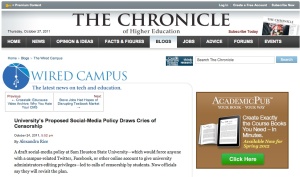 The Chronicle of Higher Education recently released an article about an article about how a university’s proposed social media policy backfired on them. Reporter Alexandra Rice reports in “University’s Proposed Social-Media Policy Draws Cries of Censorship” that students at Sam Houston State University didn’t take kindly to the administration having access — and editing privileges — to their social media accounts.

The university released a new social media portal called Social Universe was deemed to be a one-stop portal for social media users at the university. The original policy draft indicated that any department or organization  that joined with a university e-mail account would be required to surrender their account passwords to the university, thus giving the university the right to oversee and edit activity on all accounts.

Essentially, this meant that any student, staff, faculty, department or student club with a Facebook, Twitter or any number of other online accounts that was registered with a university e-mail address could be monitored, edited, censored or even deleted by the university.

The students cried censorship. They staged a demonstration against the policy that included a “free speech wall”. That resulted in campus police citing students for creating a public disturbance… a situation which rolled itself into a second “free speech wall” later on.

In my humble opinion, if this university truly wanted to craft an effective social media policy, it would involve its users. By this I don’t just mean having reps from the student union sit on a committee, but I mean a large-scale public conversations over a period of time with all social media users at the institution.

Writing social media policies is tricky business. As this university found out, social media belongs to its users, not any one service or organization.

Policy makers are used to having all the authority when it comes to developing procedures, processes, and behaviour guidelines. Social media, social networking, flash mobs convened via Twitter and text and other forms of social interaction using technology have changed all that.

Power to the people has a whole new meaning in the era of social media. Policy-makers need to involve people, not tell them what to do. The old ways aren’t working any more, so find new ones that will.

Did you know that September 24 to October 1, 2011 is Banned Books Week sponsored by the American Libraries Association and 5 other organizations.

In celebration of the week, I’m pledging to read at least one banned book (though I haven’t decided which one yet.) Lauren Davis reports in the Eye on Education blog that the Harry Potter series has been the most widely banned book series of the past decade.

My friend and mentor, Dr. Nicholas Zekulin, a professor of Russian at the University of Calgary has what we believe to be the world’s largest collection of Harry Potter books in translation. Maybe I’ll pick up the Spanish version and enjoy Potter en español.

Here’s my invitation to join me in reading a banned book this week, or at least have a conversation with someone else about censorship, freedom of speech or banned books.

Recently I posted a story about a girl who started a secret library of banned books. The location of her library was a locker at her school.  The article talks about a list of banned books that the girl found and she turned it into her own personal reading list.

That got me thinking about banned books. I did a Google search for “list of banned books”. The search returned over 25 Million results. I found Canada’s Freedom to Read site, which led to the “Challenged books and magazines list” that is released by the Canadian Library Association.

They don’t use the word “banned”, but that’s essentially what they mean. The association maintains a list of books that are prohibited by organizations and community groups. Any organization, group or institution can come up with a list of books they prohibit their members from reading. Whether or not the ban is actually upheld is a different issue entirely.

Because of the number of requests that come forward to ban reading materials, the  produces Canadian Library Association a list of books that are challenged in any given year, if for no other reason than to raise awareness about censorship.

For example, in 2010 in Canada, 74 titles were “officially challenged” by different organizations including:

This is only a sampling of the 74 titles that were officially challenged in 2010.

The site also points out that “Censorship studies usually show that most library challenges go unreported and undocumented.”

It’s hard to say what books have been banned (either officially or unofficially and quietly) by school boards across the country.

But for those of you with that same rebellious reading streak that I have, here’s a little gem I think you’ll like: The University of Pennsylvania maintains a list of banned books that are freely available online.